The Club had a record number of entries at their annual club championships held at the Victory Pool in North Walsham when seniors, Leah Harris won no fewer than seven events and Harry Hudson won six but it was in the development and Junior sections which caught the imagination of the spectators

The under 9 years 50m freestyle saw Lilly Dear easily won the event on 44.37 with the consolation places going to Alice Dickerty and Edith Hopkins.  In the corresponding boys’ event Toby Corfield had his first win of the championships when he came in on 45.78. Toby later triumphed again this time in the 50 backstroke. However, he was pushed hard  by Reuben Seaman but just managed to hold on to first place in 51.12 in an exciting finger tip finish over Reuben’s 51.62.  Reuben himself also went onto be a double winner in the 50m butterfly (59.43) and 100 Individual Medley in 1:59.58 respectively.

In the 12/13 Individual Medleys  Rosie Dickerty  surprised a very strong line up when she made the freestyle leg of the race count touching the wall first in 1.34.37 as only four seconds separated her from, Romilly Hammond, Emily Morton and  Emily Beighton. However In the boys’ event the opposite happened as  there was clear daylight between  Isaac Buchan,  Archie Haughan-Zelos,  William Coop, and brothers George and Zak Edridge.  Isaac was easily the winner in 1:24.85.

Esme Seaman and Rebecca Burrows showed all what an exciting prospects they are. Esme won won seven events and Rebecca  five. Esme enjoyed her 200m Individual Medley best of all because” I had never done it before” and the 200m breaststroke gave Rebecca the most satisfaction “as I got to pace it well.” They claimed their first places in 3:34.60 and 3:30.75 respectively.

2. Teams get ready for the relay. 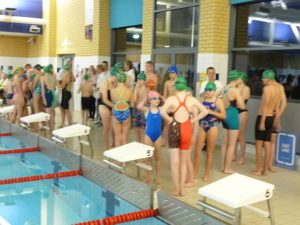 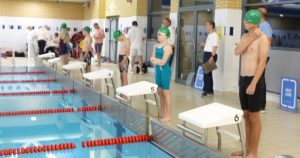 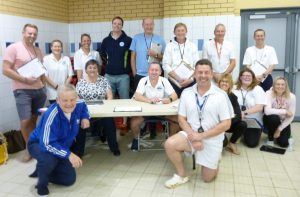