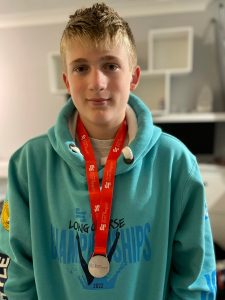 Isaac Buchan Silver in the 800m

Isaac achieved a silver medal in the 800m freestyle in the Regional Championships despite having a tough week end at Luton. Isaac, who is in his last year at Beeston Hall School qualified for the competition in no fewer than six events.

The thirteen year old looked a definite threat in the 200m when he came fourth, just 0.5 out side the medals with his 2.25.80 but after putting that disappointment behind him, he swam a personal best in 10.42.61 to take the silver.

Michael Sayer of Holt was also in action when he went 3:05.09 in the 200m backstroke 8 seconds ahead of his winning time in the County Championships but was still outside the medals. However, Michael,aged 11 has had a very productive season in the pool and looks promising for the future.

Regional races prove to be tough for duo

Leah felt her 100m freestyle race was her best race out of four events she competed in., Leah was first in her heat with a  long course personal best time of 1:02.32, coming twenty first out of forty four in her age group of 17 years and over; with four seconds separating her and the eventual winner, Sacha Thomas of the City of Norwich who went 0:58.30. in the final.

This year will mark Leah’s  twelfth year with the club. Leah – who is now 18 years old, from Cromer – started swimming at Splash (now the Reef) in Sheringham when  was 6.  She then moved to North Norfolk Vikings Learn to Swim at Cromer when she was 8, having lessons with Callum Lawson, who was the Vikings Head Coach at the time and an ex Paralympian.  Leah then moved  to club swimming and started competing at the age of 10 and is still competing and setting an excellent example to younger swimmers.

Harry,  aged 17, from Smallbough near Stalham  put in a stoic efforts to qualify in two events. In the 50m butterfly he hit the pad in 28.38  and in the 50m freestyle he went  26.10 opposed to the 32.83 recorded by winner Theo Cannon of Cambridge. Although he did not medal he was only a few seconds behind the medal winners. Harry was up against a field of eighty six competitors