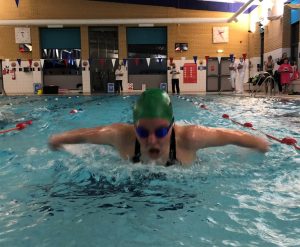 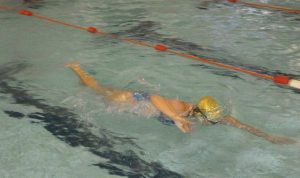 Leah and Isaac setting the pace as Vikings return to competition

Competitors from North Norfolk Vikings Swimming Club participated in their first virtual competition since March and the first part was contested at the Victory Pool on Sunday when all events were over the same, 200m distance in Swim England’s National Level X Racing. This a nationwide club time trial giving club members the chance to compete against swimmers from across the country, to rejuvenate their racing skills and to try to make it onto the Level X Racing Leader boards!

Meanwhile, friendly Viking rivalries were also inevitable right from the first event, the Individual Medley where competitors swim all strokes. There was no doubt about the fastest here, seventeen year old Paston six form college student Leah Harris who led from the gun finishing in an impressive   2:36.37 from Club Captain Katy Coleman. However, Leah had an ironic  challenge later when her coach Sam Watts and masters swimmer Spike Buchan were time trialling in adjacent lanes in the Freestyle.  After an even 150m it was Sam who who moved ahead of Leah and provided an exciting close finish; not against Leah but Spike, who hit the pad in   2:18.89  a split second ahead of Sam. All three recorded creditable individual times which should put them in contention for the leader board in their respective categories.

In the junior heats, the ever improving Nelson Yarbo made no mistakes in 3:33.32. and there was a pleasant surprise from Bailee Beighton of the development squad who competed well and carried off the distance untroubled. There was a sibling rivalry, again in the junior section, between George and Zack Edridge also in the freestyle. Zack led for most of the distance but George made an outstanding come back on the last 50m. However, Zack just held on to record a fater time of  4:15.95  in an exciting finger tip finish. Emily Brighton and Esme Seaman, took the consolation places

It was an almost identical scenario  when the Edridge brothers met again, this time in the breaststroke. It was Zack fractionally ahead of  George in 3:57.09 and in the corresponding girls’ event, Romilly Hammond, who attends Beeston Hall School, achieved the fastest time of  3:43.06 from Madeleine Wicks and Emily Beighton respectively. In the backstroke it was Romilly again with  3:36.27 with Emily as runner up.

The first evening concluded with the Butterfly and full credit must be attributed to both, Katy Coleman and Isaac Buchan. It is a demanding event and although not a race as such between the two, both competed well against the clock. Katy “was pleased” with her  2:49.37 and Isaac who is five years her junior went 3:50.62 after him being the fastest boy in the backstroke scoring 3:16.00 and the  Individual Medley with 3:16.03

The concluding part of Swim England’s Level X took part again at the Victory Pool and had no fewer than twenty-one swimmers competing and the club set its swimmers the ultimate challenge in what many Olympians believe to be the “blue ribbon event: “ the 4 X 100m Individual Medley,(IM). Sixteen continuous lengths of the victory pool displaying ability on all four strokes. It was the ever present Leah Harris although she admitted that this was her first 400 IM as it was for Kay Coleman and Isaac Buchan. Leah was clearly the fastest in 5.28.45 and creditable times were recorded for Katy and Isaac respectively.

After an exciting encounter in the 200m freestyle, during part one of Level X, the trio of Sam Watts, Spike Buchan and Leah were drawn again in adjacent lanes and joining them for this 100m event was fifteen year old Harry Hudson. It turned out to be  the swim of the evening. On the last 25m it was clear it was going to be between Sam and Spike again but last week’s  positions were reversed as Sam was first home by just under two seconds from Spike in 1:02.31 with only respective marginal time differences between Harry and Leah.

In the 50m Freestyle, there were no fewer than eighteen competitors trying for a place on the leader boards. The fastest time in the masters was  28.32 achieved by Spike and in the seniors,30.0 by Harry Hudson. In the girls trial it was Leah Harris in 30.39 from Katy Coleman respectively. Both eight year old  Reuben Seaman and new comer, ten year old Bethany Brooks made the most of their opportunities in the event displaying solid performances whilst gaining invaluable experience.

Bethany did well again in the 50m butterfly as did Aylsham High School student Amy-Rose Thomas who surprised a number of people when she demonstrated an adroit technique proving to all the significant improvement she has made not just in the butterfly, but all strokes when she had earlier swam in the 100 IM. Gresham’s student, nine year old Michael Sayer also displayed how well he too had improved, especially on his freestyle.  Harry Hudson swam fastest in these two senior respective events achieving 36.21 and 1:11.84. from eleven year old Isaac Buchan and his nine year old brother Noah who swam well in no fewer than seven events.

In the breaststroke Ruby Tracy was outstanding in the 100m and by far the fastest in the girls with her 1:30.38 from Romilly Hammond.  However, Ruby did not have it all her own way as in the 50m it was Leah Harris in 40.90 ahead of Ruby. Sophie McKee, Esme Seaman and Maisie Fagan also made a positive contribution to this and other events; all of whom are undoubted prospects for the future. The boys 100m corresponding event had the ever present Edridge brothers with Zack being two tenths of a second ahead of George in 2:06.03.

Just after the swimming concluded, Club chairperson Sarah Buchan, who also swam in the trials, explained

“ The performances just proved how much potential there is in the club and everyone was excited to be competing again. Its a shame that we could not have any spectators in due to covid restrictions.”

Meanwhile, the swimmers wait patiently for for the Level X rankings to be issued.