North Norfolk Viking Swimmers, Romilly Hammond, aged 13 Isaac Buchan 12 and his younger brother Noah,10 “swam the channel” in a relay tandem swim in Beeston Hall School pool, where all three attend; raising money for much needed club funds. The trio took the plunge as early as 7am and finished at 7-05pm covering the 22 miles distance channel swimmers have to complete between England and France. They were supported by fellow club members who also swam with them at various stages. Club Captain Katy Colman, Michael Sayer, Amiyah Hawes, masters Mark Claxton, Julie Coleman Sarah Buchan Spike Buchan and Lead coach Sam Watts, who also did a stint in the pool. At the conclusion he said:
“ This is the first real club event for us since the lock downs began and It brought the club together. I would like to congratulate Romilly, Isaac and Noah for their endeavour especially as they had to battle against the cold and rain and thanks to all the supporters and helpers who came along to cheer them on.” 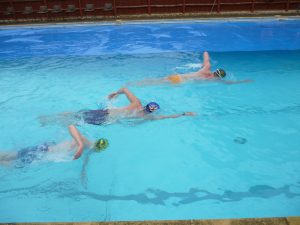 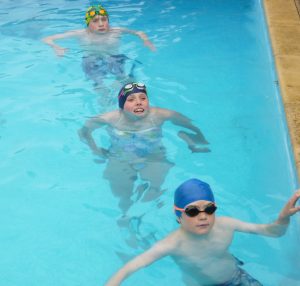 Photos
1. Sam (top) Spike and Isaac just after the half way mark

2. Isaac (top), Romilly and Noah at the conclusion of their channel distance swim relay.