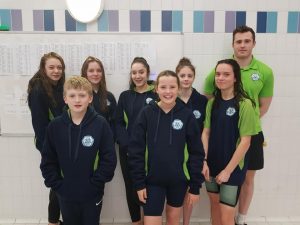 13 swimmers represented the club at the annual Norfolk ASA County Championships held at the UEA sport spark over 3 weekends in January and February. The swimmers results included 31 top 8 positions and finals, as well as 10 medals including 3 bronze, 1 silver and 6 Gold’s.

The championships marked the first long course meet within the 2018/2019 racing season, as well as the first time racing in a 50m pool for some of our younger swimmers. The team pulled together well, with the older swimmers leading dry land warm ups before pool warm ups for races, and encouraging one another before and after races.

Joseph Hollick started the racing with the 200m freestyle event producing a strong swim in 3:11.18, converting to a PB from a long course swim. This placed him 13th in the 10/11 year age group. Five of the girls then raced the 100m backstroke. Abi Gotts secured 1:17.77 in her swim beating her short course PB, securing a position for the final and finishing 6th, along with Natalie Claxton who placed third in her age group, achieving third in the final also. India Weston also placed 4th in the open age group, securing 6th overall in the final.

In the afternoon session 6 swimmers raced the 200m Freestyle, where Emily Haslam achieved 1st place in the 15 year age group in a time of 2:16.80 to equal her short course PB. Abi Gotts placed 7th; India Weston 4th; Leah Harris 12th;Steph Claxton 12th and Alanya Shaw 18th. The girls were then faced with a tough challenge of the 200m individual medley shortly after the 200m freestyle, and we saw India Weston achieve the bronze medal in the open age group. Natalie Claxton had a great swim beating her short course PB and taking 5th place in 2:59.60, with Abi Gotts also placing 5th.

The next session included the 400m freestyle event, where Emily Haslam achieved second place just 0.1 seconds behind first, in 4:53.40. Later that session she went on to win the 100 freestyle in 1:01.87. Other finalists included Abi Gotts who came 4th. Congratulations also to Raphaelle Horne-Morris and Natalie Claxton who both equaled their short course PB’s in this event. In the afternoon the girls raced the 50m freestyle event, with Ella Haughan-Zelos achieving a PB in 36.70. Katy Colman also PB’d in a strong performance placing her 16th. In the afternoon the girls all swam well in the 50m fly, where we saw 7 swimmers achieve a PB, including Florence Street racing this event for the first time in the 50m pool. This was a great performance and a reflection of the work they have done on this stroke in recent months.

The final day of the meet occurred on Sunday 10th Febraury having been re-scheduled from the 27th of January after maintenance issues. It had been a long championships for the swimmers and the last day saw Natalie Claxton secure the gold medal in the 50m backstroke final in a strong swim, taking the race by half a body length. Isaac Buchan had a fantastic swim in the 100m freestyle, securing a 3 second PB in 1:31.55. Ruby Tracey swam the 200m breastroke, finishing 6th in the 14 year age group in 3:14.23. She swam the race very smartly and with a good stroke, showing improvement from recent months. In the afternoon Emily concluded the championships for the club taking the gold in the 100m fly in a PB of 1:10.85.

Congratulations to everyone who competed, everyone swam well and are looking promising for the season ahead. Well done to Emily Haslam and Leah Harris on achieving regional qualifying times, and thankyou to the team managers for their assistance during the competition.